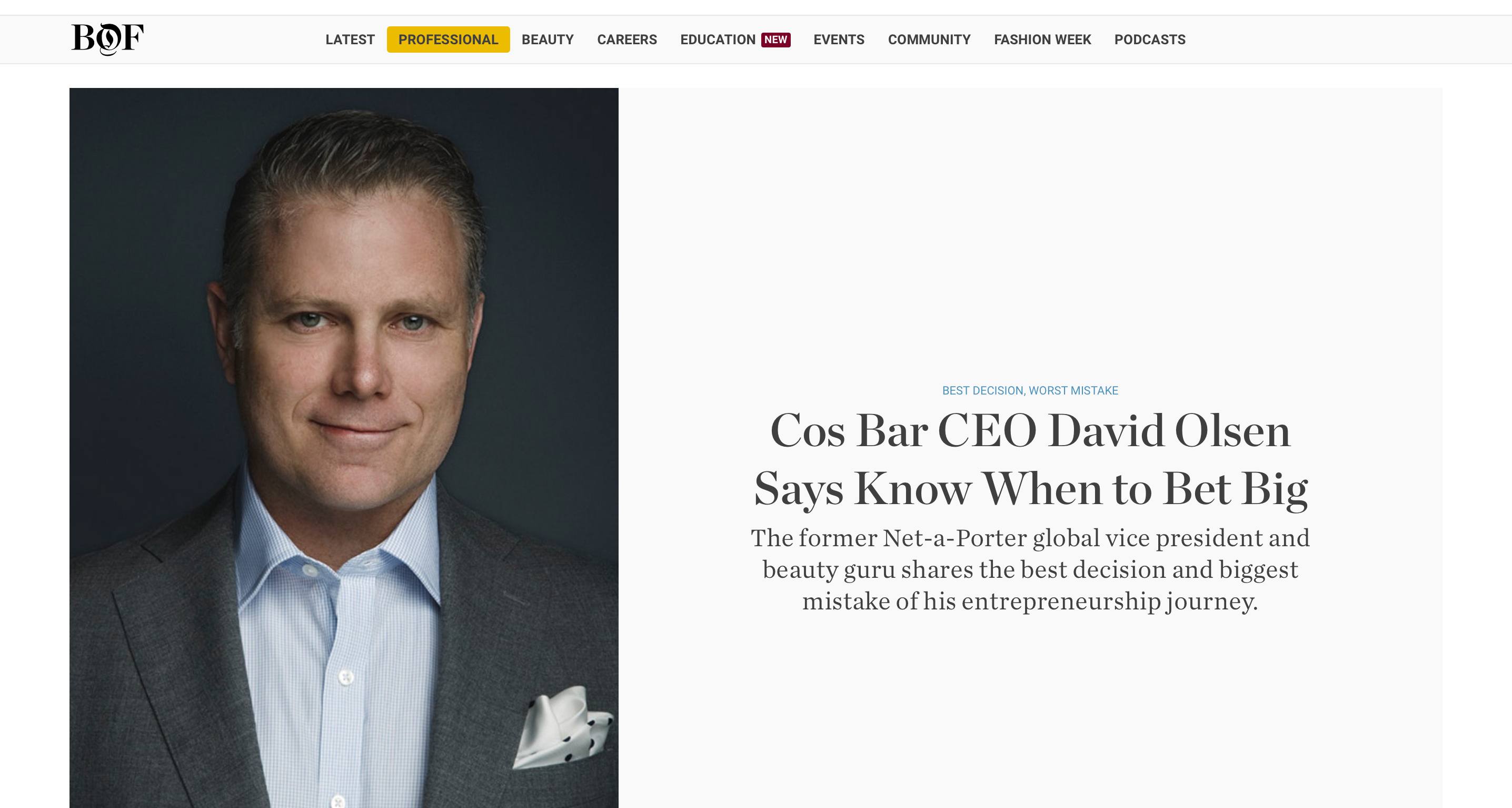 The former lawyer’s foray into the beauty industry began nearly two decades ago when he asked his mother, a prominent Brentwood dermatologist, if he could build her a website and start selling the clinical products she carried online. “I was smitten with the internet bubble of 1999 and was looking for something high-margin and light to ship," said Olsen. "Low and behold, the stuff in my mom’s office was … high-margin and light to ship."

And so, “litigating by day, packing boxes by night,” he embarked upon a new venture creating an e-commerce platform for physicians — “like a Farfetch for doctors and medi-spas, well before its time,” he said — which he eventually sold to Dermstore in 2009, joining the company himself as vice president of business development and operations. (Dermstore was eventually acquired by Target in 2013.)

Olsen went on to kickstart the beauty business at Net-a-Porter — The New York Times christened him “Net-a-Porter’s unexpected king of beauty” in a 2015 profile — and now leads Cos Bar. Founded in Aspen by Lily Garfield in 1976, it was one of the original multi-brand luxury beauty retailers and received significant private equity investment from Tengram Capital Partners in 2015, and currently has potential buyers circling.

A mentor to many in the beauty industry, Olsen is refreshingly self-deprecating and famously fearless. “I generally throw caution to the wind and am always open to trying new things, and when you do that, you’re going to make a lot of mistakes,” he said. “I do my best to hold on to the learning and then forget the actual mistakes, and move on.”

His modus operandi is high on risk-taking, but it works out, most of the time. “I am the firmest believer in asking for forgiveness rather than permission in an organisation,” he said. “By waiting for permission you never get anything done. I’ve gotten my wrists slapped along the way, but nothing career-destroying. I hope the people who work for me now realise they can be better than the system. That’s the only way you’re going to improve.”

“You get the biggest wins sometimes from betting on the unknown. When something is completely unproven but you can answer all the questions of why it makes sense, betting on it often pays off exponentially. The best example is beauty at Net-a-Porter,” said Olsen, who, as global vice president, beauty and grooming, wrote the business plan and started the vertical, increasing revenue by 400 percent within three years.

“I mean, I had to convince Mark [Sebba] and Natalie [Massenet] on multiple occasions why beauty made sense for them," he recalled. "I originally called Natalie to see about doing beauty for Net through Dermstore — giving them a white label beauty business, a business development deal — and she said, ‘no thank you.’ Then she called back later, to say, ‘ok, we’re thinking about beauty.’"

"Everyone was skeptical,” he continued. “They thought, ‘we’re a fashion business.’ And back then, beauty was still very brick-and-mortar focused, so they were concerned about how [to] sell beauty online and I had to quell those concerns,” he said. “Not to mention, we had to break barriers with international distribution. That was an unknown. We opened three distribution centres and were global in the first year. We were able as a team to change the entire landscape of global beauty retailing.” 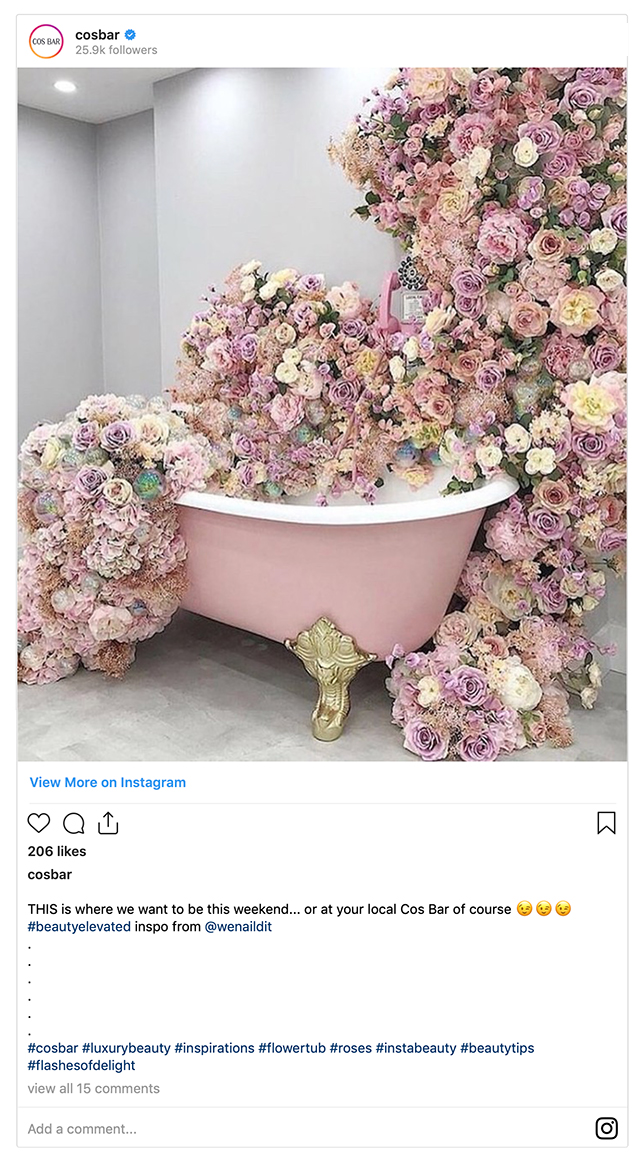 Another risk Olsen took in 2016 was rebranding Cos Bar, a beloved institution with well-established equity. “I had never done a rebrand, and I came to Cos Bar and I didn’t think we needed to do anything, but a handful of people said, ‘you’ve got to change that gothic logo,’” he said. “I didn’t want to tamper with the history of the brand, but it was the best thing we could have possibly done, because it really laid the foundation for the change that was going to come to the business overall. The goal was to keep the history that resonated with the clients, and to give us the ability to acquire new clients.”

Indeed, after remodelling the Carmel, California store in December 2017, sales spiked by 50 percent, “which is nuts in brick-and-mortar for a 12-year-old store,” said Olsen. Under his watch, Cos Bar has grown its business over 60 percent, expanded from 14 to 20 locations in the last three years, ramped up its e-commerce presence (with penetration to total business increasing from 2 to 15 percent), and experimented with new strategies, like a shop-in-shop in Banana Republic’s San Francisco flagship.

“Taking where we want to go and where we’ve been was challenging, but it was a great exercise to come together and create a new clean brand for the ages,” he said. “Almost all of the most iconic brands have been through a refreshment and this one had been around for 40 years.”

Biggest Mistake: Diving in Too Early

While the bigger the risk, the bigger the reward, said Olsen, diving in too soon can spell trouble. “When I was at Dermstore, we were trying to do a makeover mirror online, way ahead of its time, with a small company,” he said. “I was totally enamoured of the technology and I thought the pitch was amazing. We spent thousands of hours working with their team. It went live, everyone looked like a clown and our conversion went down,” he continued. “I wasted all of those hours because of my firm belief it would be a game-changer — and it was a game-changer, eventually — but the world wasn’t ready for it then, and the technology was horrible.”

“That’s my mistake: being too early to things. I get excited too quickly. I just love good ideas. The lesson is to try not to be enamoured of every shiny bell and whistle,” he said. “Ask a lot of questions and push them on the answers.”