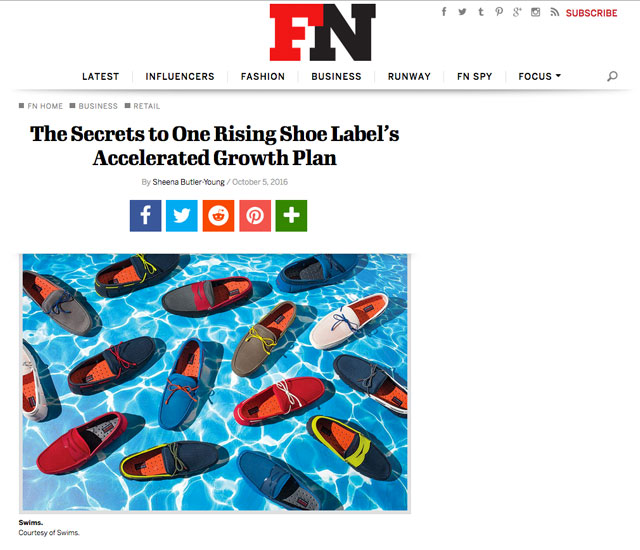 October 5, 2016 - Differential Brands Group is getting into the swim of things.

The brand management firm acquired Scandinavia-based footwear label Swims in July, with plans to ramp up its North American presence.

"We're moving some of the functions to the U.S. [because] we see the U.S. as untapped opportunity," Differential CEO Michael Buckley said. "Swims had a Canadian distributor that was running [its U.S. business, but to be successful here] you need to be 'boots on the ground' with a management team that understands the U.S."

Buckley's first step toward building a more U.S.-centered executive team was to tap former Sanuk chief Jake Brandman to serve as the new president of Swims.

"[Brandman] is a strong merchant and sales professional with a long track record of successfully building great brands and cultures, " said Buckley, who hired Brandman in August. (In addition to his tenure at Deckers Brands-owned Sanuk, Brandman has also worked at Teva, Vans and Keen Footwear.)

Swims, known for its galoshes and boat shoes, is sold in 400 doors in the U.S. — including Neiman Marcus and Nordstrom.

"On the footwear side, we will build product across both genders, and we will focus on making it an all-year-long type of product range," Buckley said. "Today, it's more of a resort and spring/summer business. We want to [add] fall and winter [footwear]."

"Swims are sought out by a diverse spectrum of [our] clients," Eisenberg said. "They are entry-priced in our matrix, and our experience is that customers often buy multiple pairs every season."

Swims' customer base is 70 percent male and 30 percent female, but Buckley said he's looking to change that, too.

Since its January debut, Differential Brands — the product of a transaction that merged Robert Graham and Hudson Jeans and sold off predecessor firm Joe's Jeans — has made omnichannel growth a priority, and Buckley said Swims would be no exception.

Despite the challenges plaguing the brick-and-mortar channel — many retailers have scaled down their store counts in recent months — Buckley said the firm plans to launch branded stores for Swims. Differential's chief said he's considering a 1,000- to 1,500-sq.-ft. layout that he'll test in a few locations before a major rollout.