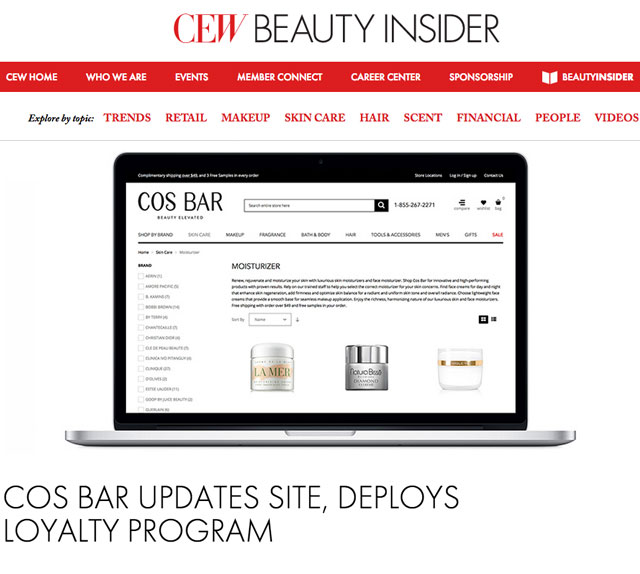 November 11, 2016 - Continuing its rebranding journey, Cos Bar has recently launched a customer loyalty program and revamped its website which includes a brand new logo and color palette. Some of the most notable changes to cosbar.com include an upgrade in speed, the addition of user reviews and quick-view capability.

David Olsen, who was tapped in February from Net-A-Porter to become CEO of the 14-unit specialty beauty store, said omnichannel is the biggest focus.

"One of the reasons I was brought in was because ecommerce was a very small piece of the business with a big amount of opportunity. So, we have made changes to take the site to the next level, and will continue to make improvements daily. The irony is that five years ago I believed that no one would ever shop in stores any more but the reality is that dot-com sales are still only 10 percent to 15 percent of total retail. I'm about giving the customer the best service wherever she is and whenever she expects it. Touching product and being face to face with a beauty specialist can't be recreated online, but if we start with the customer as the focus point, we will try to meet her needs both physically and digitally."

Earlier this year Cos Bar announced plans to expand and rebrand, timed to align with its 40th anniversary. With a major financial investment from parent company Tengram in December 2015, the retailer also significantly expanded its leadership team, including four marketing roles, in addition to the new logo and color palette. Looking ahead, Cos Bar will open its flagship Southern California location in Brentwood this month, with plans to remodel existing stores and open 36 new stores over the next five years.

To best learn about Cos Bar, David enlisted in a six-week road trip where he visited all 14 Cos Bar stores across the US.

"Initially I wanted and needed to learn and focus on the brick and mortar piece, as it is the lifeblood of our business. I went to every store and learned about our customers and our in-store systems. It was one of the greatest experiences of my professional career. I asked a million questions, talked to the beauty specialists in store and asked customers how we can best serve them."

One of the first things he did was hire District Managers for the East and West coasts, which helped "store managers tremendously."

Coming from the digital world David knows how important data is, so he began sharing stats across the chain, which otherwise had little communication from unit to unit, such as customer count and best-sellers.

"It actually started a little friendly competition among the stores, which is good."

A loyalty program, b. cos, launched to directly speak to customer feedback.

"I was in a store and overheard a customer say that she was going to wait to buy a product in another store so she should could get points. That was it."

In just a couple months' hundreds of thousands of points have been issued and tens of thousands have been redeemed. B.cos has been integrated to the website, too. The plan is simple: points are rewarded for dollars spent with 3 percent back on future purchases. In just a few months with the new tweaks, cosbar.com has grown its online business from 1.5 percent of the business to 4.5 percent. David's goal is to reach 20 percent of sales in three years. The addition of Amazon payments will help get them there, David said, where a customer pays online by logging into their amazon account.

Social media has also been a focus.

"When I joined we had 740 Instagram followers. We are now up to 22,000." Plans include rolling out live beauty specialty how-to videos on Facebook live, and live video chat.